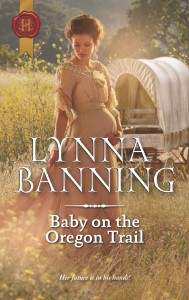 I love stories about traveling West on the Oregon Trail. I can't imagine surviving the journey across thousands of miles in a covered wagon, battling the elements, hungry, thirst, disease, and the Native tribes. I am always drawn to these stories, and Baby on the Oregon Trail was mostly a successful read.

At first I couldn't stand Jenna or her stepdaughters. They were all so mean and unpleasant. I could certainly understand Jenna's frustration; she's pregnant, she's been forced on a journey she don't want to be on, and her husband has just been shot dead for trying to steal a horse. Now in charge of her late husband's bickering daughters, she's at her wits end. She doesn't even know how to hitch and drive the two old oxen that pull the wagon. And she's terrified of large animals. She has no survival skills, and they have just started out on the long trip West. Ugh.

When Lee Carver volunteers to drive their wagon and help with the family, Jenna is outraged. Lee is the man who killed her husband. Never mind that her husband was stealing his very expensive horse, and that he was riding hell for leather back East. Her stepdaughters are also opposed to having their father's killer assist them, and everyone treats Lee like trash. He has another strike against him; he's a Virginian, a former Confederate soldier, and the animosity between Northerners and Southerners is still brimming over with hatred. Lee is treated as an outsider by almost everyone in the wagon train party, despite being dependable, honest, and helpful.

The romance is a slow burn, which I liked. As Lee and Jenna get to know each other, they share secrets and private details of their painful pasts. Lee plays referee between and her two oldest stepdaughters, who are both spoiled and difficult girls, who don't want to pull together and help with chores to ensure that they reach their destination safely.

I didn't like how the Native Americans were portrayed - they were the typical stereotypes you'd expect and didn't even really need to be included in the story - with the exception of Lee's kindness to a gravely wounded boy and his unexpected reward. It was so corny but I found it touching regardless.

The ending was very convincing, and I know that Lee and Jenna will have a HEA on Lee's horse ranch. While not all parts of their journey rang true or held my interest, I did enjoy the conclusion of their long trip along the Oregon Trail.
Tweet
8878 BOOKS
Twitter