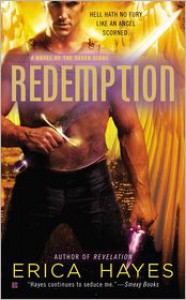 I don’t read many paranormal romances, and I’m not sure why. I enjoy them on the odd occasion when I do pick them up, and Redemption was no exception. This is the second book in Erica Hayes’ The Seven Signs series, and I didn’t have much trouble figuring out what was going on, even though I haven’t read the first book, Revelation (which has a zombie virus, so I will be reading it, hopefully soon!). The series features the war between angels and demons and the prophesied end of the world. I enjoyed how the angels were portrayed in this story; just because they are angels didn’t mean that they were “good.” What was even better; Japheth, a Tainted angel, is working tirelessly for his redemption, so he can return to Heaven. His fellow Tainted behave like fraternity boys; drinking, chasing women, and partying in between missions slaying demons and hellspawn, and trying to stop the Apocalypse from happening.

Michael is in charge of the angels, and he’s a ruthless jerk. I hated him. He’s power hungry and cruel, and he doesn’t hesitate to sacrifice his angels if it will fulfill his ambitions. He sends Japheth to kill Fluvium, the Prince of Thirst, and recover the vial of wrath in his possession. Japheth doesn’t know why Michael cast him out of Heaven. He’s always been brave, righteous, and dedicated to serving God. All he wants is to be let back into Heaven. He lives a life a purity, distaining pleasures of the flesh, and obeying orders to the letter. What does he get for his sacrifices? A never ending hard-on and no sense of humor. Poor guy.

Rose Harley is Japheth’s unlikely match. Like Japheth, she’s been tricked, and now she’s a vampire, the slave of Fluvium. He’s ordered her to steal Japheth’s soul, or he’ll throw her into Hell. Terrified of the never-ending agony of Hell, Rose is determined to carry out his commands. She’s killed angels aplenty – they don’t call her Angel Slayer for nothing. When the two meet, however, they both discover that they have clearly met their match. They are both fierce warriors, they are both driven to carry out their mission at all costs, and they both have preconceived notions about the other that are wrong, wrong, wrong. Circumstances have fooled them both, and robbed them of their dreams. Rose has lived through the horror of being a demon lord’s plaything, and Japheth is the casualty of another’s powerful ambitions.

I enjoyed the world building in Redemption. I loved how the lines between the hellspawn and the angels blurred, leaving me wondering who was good and who was truly evil. There is a large cast of characters, and I want to know more about several of them, both angels and demons. I’m sure they’ll be back for future installments of the series. What I really want is to see the characters I dislike meet their comeuppance. There are several who deserve the wrath of both heaven and hell.

The pacing is blistering. After all, Japheth is racing to complete his mission and put a stop to the Apocalypse, all at the same time. He’s saddled with Rose, a vampire he doesn’t trust, but is forced to rely on. He has nothing but contempt for Rose, and he won’t even consider that there might be more than he realizes about her turning into a vampire. Nope, she’s hellspawn scum, and the sooner he finishes his mission, the sooner he can put an end to her cursed life. Nice guy! Maybe he’s not so righteous after all?

Though he took a while to warm up to, I did come to like Japheth. His fall from grace was only possible because he couldn’t see the evil in those he served. He was the ideal warrior – fighting for the faith he believed in with all his heart, making his betrayal that much more bitter. It takes him a long, long time to come to terms with what he believes his fellow angels should be, and the reality of what they are. I wouldn’t want to have to trust any of these guys, because I wouldn’t trust them as far as I could throw them.

The action is intense, and the sparks between Japheth and Rose are blinding. As they begin to trust each other, their attraction for each other blazes out of control. If only Japheth wasn’t trying to stay so pure!

Redemption is a fun, action-packed romp through a nightmarish vision of the Apocalypse, where the lines between good and evil aren’t all that clear. The romance between Japheth and Rose, two strong and noble characters who have had their faith and trust shattered, is hot and steamy and will leave you believing in their HEA.